A downloadable game for Windows

Welcome to Sulen, in this game you are a leader of a country and you have to manage the expenditure of resources for the country to survive.

-Wood, stone, coal, copper, iron, plants and water is a resource that is obtained through production, they are necessary and important not to lose.

-Weapons are also important, they diminish faster if the war gets bigger.

-Hazards such as drugs, alcohol, disease, war and conflict are detrimental to survival, you can recruit people to get rid of them, alcohol decreases on its own.

-The temperature varies the use of water. The hotter it gets, the more water is going down. The colder the water, the less water decreases.

-Electricity is very important too, it requires electricians to be produced. The quantity of coal also plays a role in the production of electricity.

You have to run the executable named (SULEN3.exe), please don't remove any files: it can cause errors while trying to run the game or missing sprites.

WANT TO SEE THE OLD SULEN? 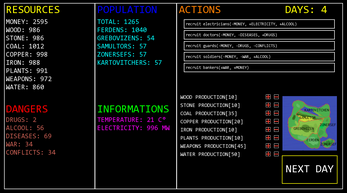 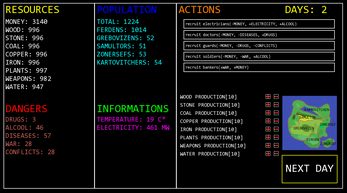